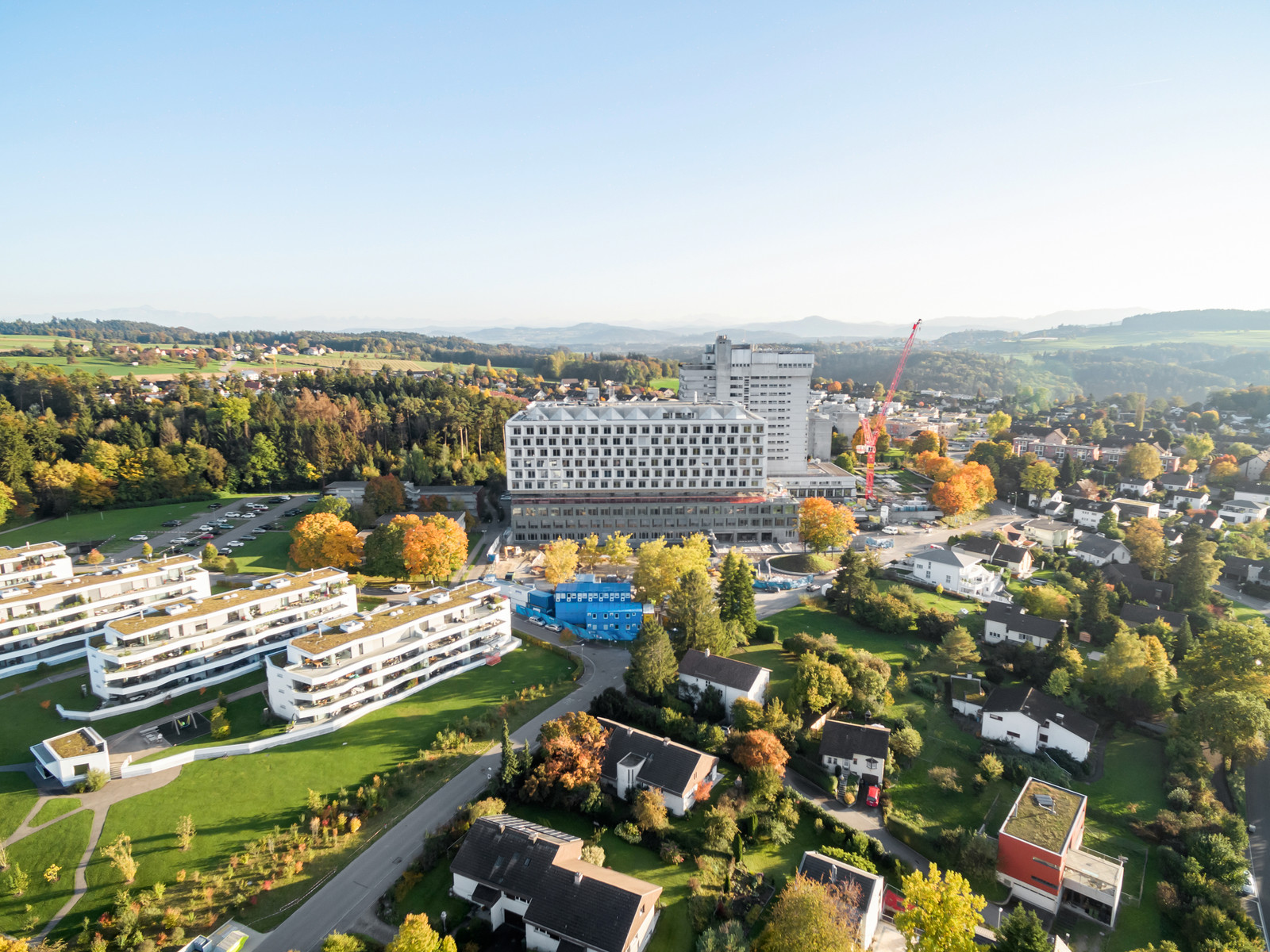 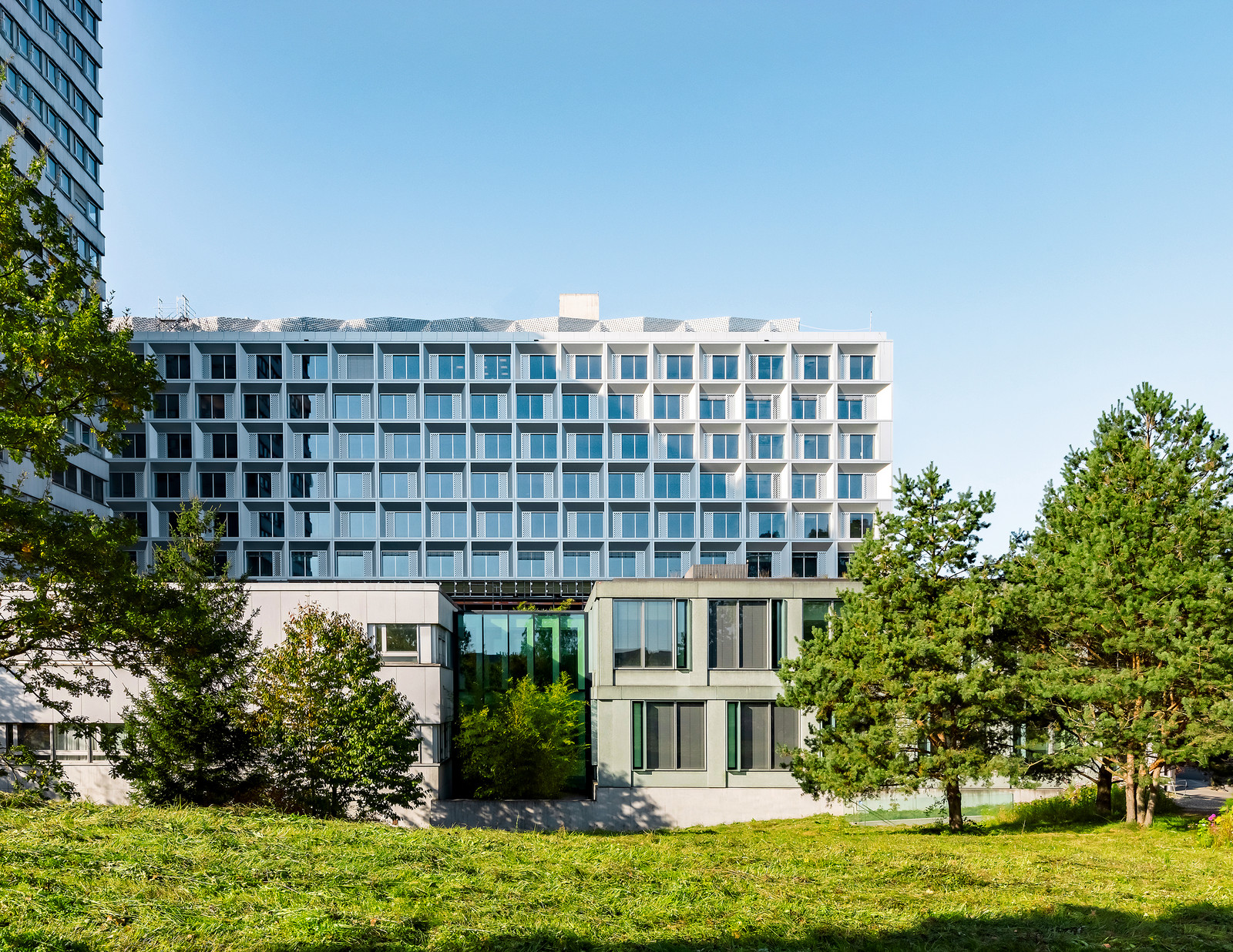 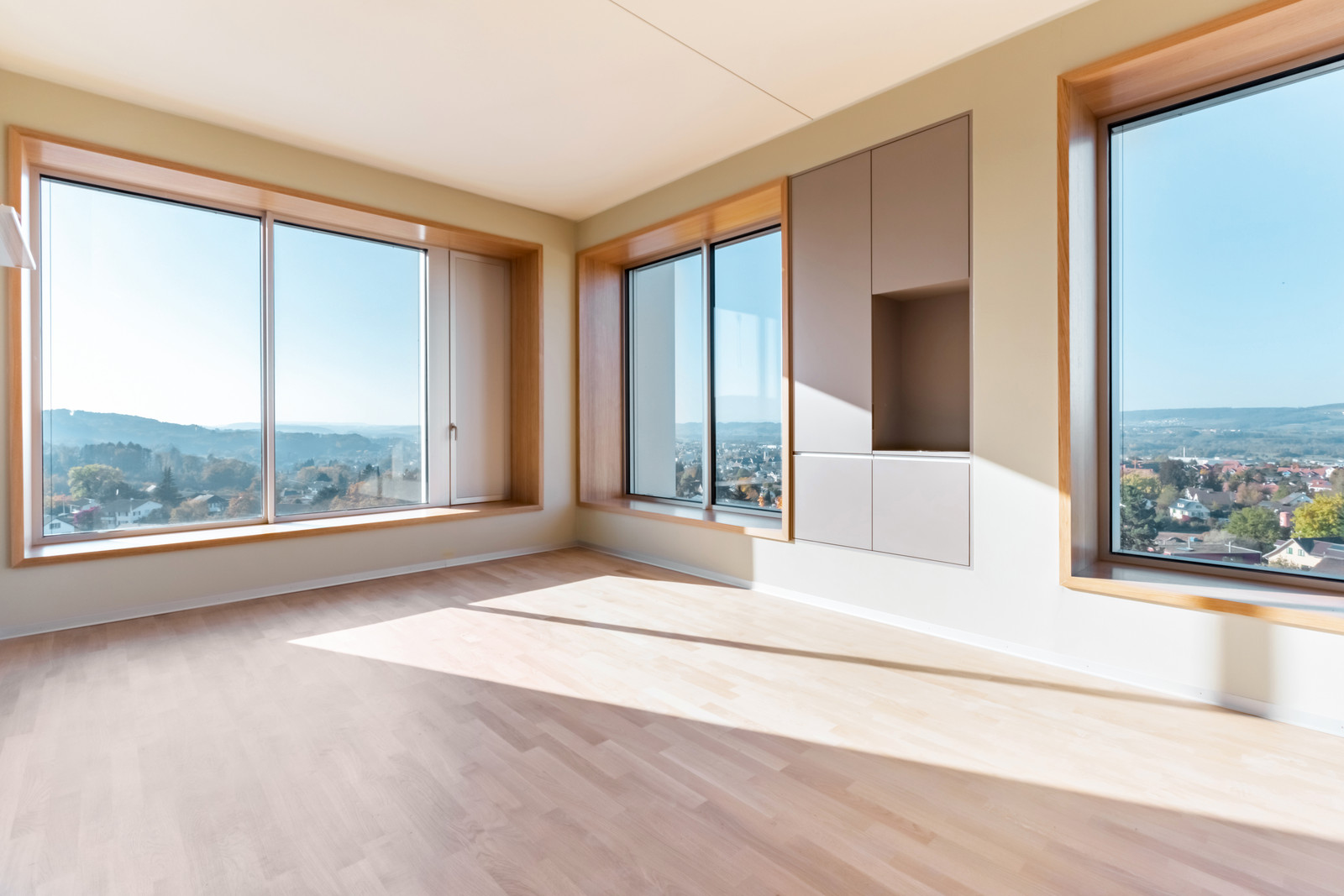 Today, general contractor Steiner AG is handing over the modern new HORIZONT hospital building to owner Thurmed Immobilien AG after a two-and-a-half year construction period. This marks an important milestone in the phased rebuilding and refurbishment of the cantonal hospital in Frauenfeld.

As well as a new north wing and ward block, the HORIZONT project comprises refurbishment of the old ground floor area. A notable feature of this project is the complete demolition of the former high-rise ward block. The present phase essentially started in summer 2016 with demolition of the north car park and the drilling of the first geothermal boreholes. The actual construction phase started with the new north wing and ward block in summer 2017.

A new-generation hospital building
The newly completed modern ward block is half as high but twice as wide as the old tower block. The ground floor now has a new reception area for central patient admissions; the clearly structured floorplan will greatly simplify patient access, especially given the rising number of outpatients. The new building brings together existing departments in a new organisational structure. Among other things, an interdisciplinary medical diagnostics centre is being created. Both existing departments and restructured units will relocate to this zone in the near future. The outpatient areas, which until now were physically and organisationally separate, are being combined in an interdisciplinary outpatient centre. This clearly structured centre features short distances between the consulting rooms, and the pre- and post-operation examination and treatment facilities of the various clinics. In addition, the daycare clinic and outpatient surgery facilities will be more accessible. At the heart of the new building are state-of-the-art operating theatres, ensuring high-quality basic medical care for the canton of Thurgau.

Functionality and efficiency
The new hospital building was designed using state-of-the-art planning principles and is geared to the future needs of patients and staff. Other attributes of this pioneering project are its functionality and exceptionally good efficiency levels. The new ward block houses around 300 beds in contemporary one and two-bed rooms with bathrooms. Karsten Hell, CEO of Steiner AG, is delighted to be handing over the new building to the owners today. “The new, ultra-modern amenities at Frauenfeld cantonal hospital, which are designed to optimise workflows, will help to meet the increasing demand among the population and public authorities for efficient, first-class healthcare provision, both now and in future,” he says.

A major project
The entrance zone and central reception area, a pharmacy and a take-away cafe opened in September 2019. The HORIZONT hospital building will be officially inaugurated at a ceremony to be held on 17 January 2020, followed by an open day for the general public on 18 January. The hospital facilities will available to patients as of the end of February 2020. It will then take until summer 2021 to completely demolish the existing ward block and build a new conference centre on its site. Since work will continue with the hospital remaining open, the specialists at Steiner AG are required to comply with strict regulations on logistics, noise, vibrations and particulate emissions until the project is fully completed in summer 2022.

Steiner AG
Steiner AG, one of the leading project developers and general/total contractors (GC/TC) in Switzerland, offers comprehensive services in the fields of new construction, refurbishment and real estate development. The company, which was established in 1915, has constructed more than 1,500 residential projects, 540 commercial properties, 45 hotels and 200 infrastructure facilities such as universities, schools, hospitals, retirement homes and prisons. Steiner AG has its headquarters in Zurich and is represented by branches in Basel, Bern, Geneva, Tolochenaz and Lucerne.