The inauguration of Kishanganga Hydro Power Project by Prime Minister of India Mr. Narendra Modi on May 19, 2018, is a moment of immense pride for all of us. It has been possible due to the dedication showed by HCC’s Kishanganga team led by A.I. Benny.

HCC has time and again taken up complex infrastructure projects and created benchmarks by contributing to India’s infrastructure journey. The Prime Minister terming the project as “an engineering marvel” stands testimony to this.

Mr. Modi had tweeted on his handle @narendramodi on May 19: “Honoured to have dedicated the Kishanganga Hydro Power Station to the nation. This project will fulfil Jammu and Kashmir’s energy needs. I compliment all those who have worked on this project.”

This mega hydropower project worth Rs 4,028 crore was the first such award on Engineering, Procurement and Construction (EPC) basis to HCC by NHPC. HCC has been involved in the whole lifecycle of the project from design through construction and commissioning. The construction of the project began in January 2009 on three fronts – Head Race Tunnel (HRT), Power House and Ventilation Tunnel.

It was critical to complete the project at the earliest in view of the dispute raised by Pakistan in the year 2010 in the Hague’s Permanent Court of Arbitration (CoA), arguing that the Kishanganga Hydro Power Project violates the Indus River Treaty. On December 20, 2013, the International Court of Arbitration gave its final award which unequivocally allowed India to proceed with construction of the Kishanganga dam in the State of Jammu & Kashmir.

HCC team created a world record of the first successful Tunnel Boring Machine (TBM) operation in the Himalayan region and accomplished a national record by achieving “highest tunnel progress in a month” of 816 meters in November 2012. The 23 km headrace tunnel was constructed 1.5 km deep in the Himalayan mountain range with adverse geology. The team overcame these challenges with meticulous planning and implementation of effective support systems and grout treatments.

Our team also braved harsh winters where temperatures would drop up to –25°C. The work on the dam wall and the three spillway channels was done under tarpaulins with heaters. To get the required temperature of 10°C at the time of pouring the dam concrete, water was first heated to 50°C due to freezing temperature in the area.

There was also the looming threat of avalanches and at times, air medical evacuation had to be undertaken from this remote Gurez site. In 2016, several shells fired by the Pakistan Army landed in close proximity to the dam. Despite all these challenging conditions, the timely completion of this project along the LoC speaks volumes about the team’s capabilities and dedication.

We thank each one of the team Kishanganga and our partners/associates for their contribution to make this project a success and look forward to HCC creating many such marvels for the country. 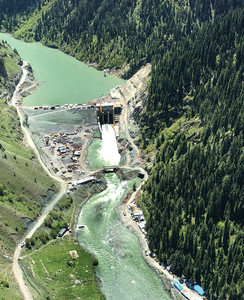 Aerial view of the dam at Gurez

Avalanche being cleared by excavator