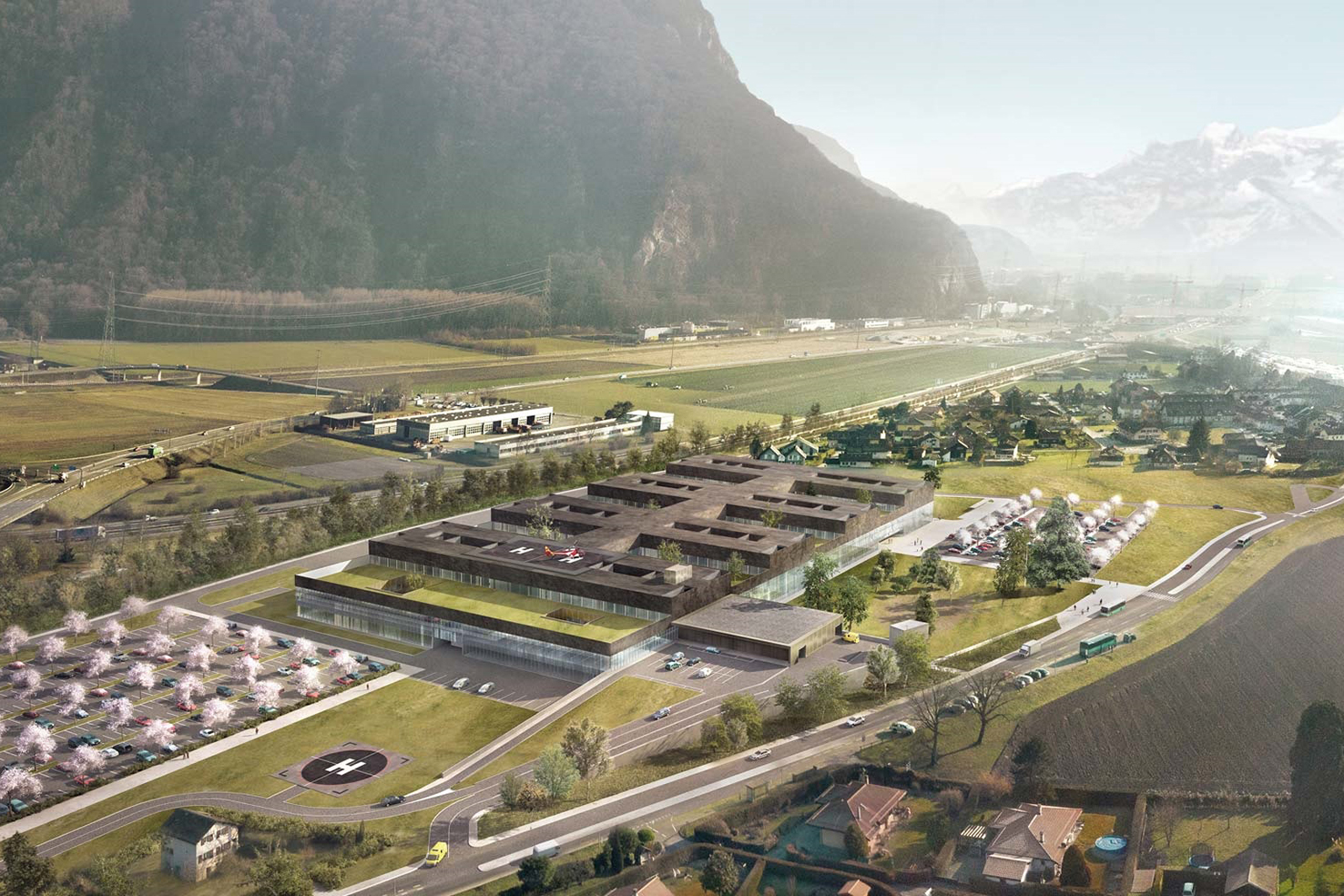 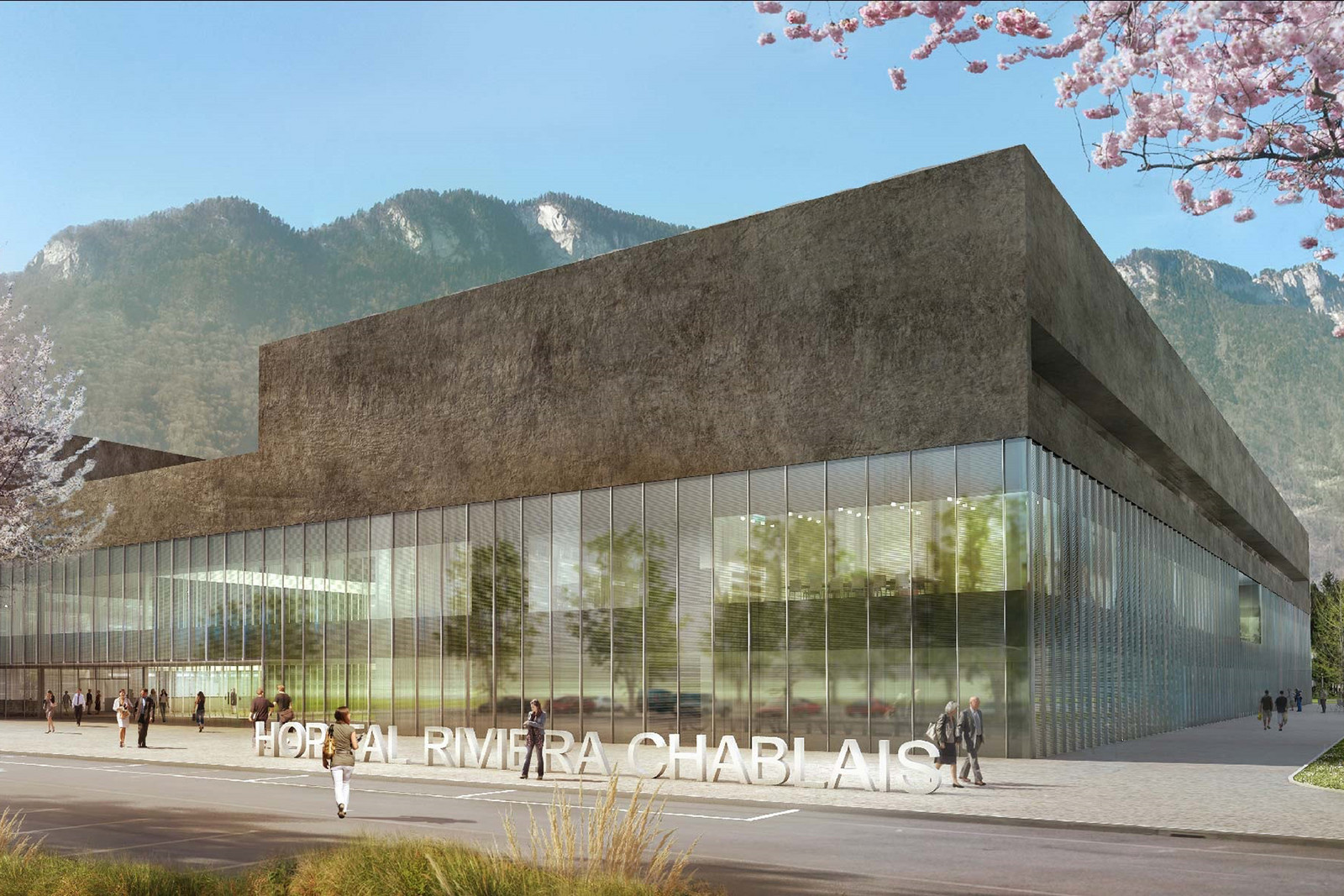 When completed, the new Riviera-Chablaishospital (HRC) will replace the existing acute hospitals in Vevey (Samaritain and Providence hospitals), Montreux, Aigle and Monthey, and will ensure the future provision of basic medical care for 180,000 people in the Cantons of Vaud and Valais. The scheme, entailing total construction costs in excess of CHF 200 million, will be implemented by Steiner AG over a period of around three years.

The client, and Steiner AG, in the role of general contractor, signed a construction contractf or the sizeable new-build hospital project on 11 May 2016. The project was drafted by the consortium HRC, a group of agents under the lead management of architects from Grenoble-based practice Group-6 and Neuchâtel-based practice GD architectes SA.

The centrepiece of the new hospital, a three-storey block with a total floor area of 67,000 m², will house five business units: the first two levels will be occupied by administration, the outpatient departments, logistics, the mother and child area and the technical platform (emergency, imaging, intensive care and surgical units). The third floor will house adult patient rooms and mother and child rooms. Total capacity will be 300 beds,which can be expanded to 360 by drawing on the reserve. The rooms, arranged around internal planted courtyards to minimize noise disturbance, will command magnificent views of the nearby mountains. Marc-E. Diserens, Chairman of the Riviera-Chablais Hospital Council, is delighted with the scheme: "In addition to top-quality medical care and modern amenities, we want to offer a peaceful and relaxing atmosphere to aid the recovery of patients while offering our staff a pleasant working environment."

Forward-looking and flexible for future use
Upon signing the contract, Steiner CEO Daniel Ducrey underlined its significance for the company: "Steiner AG regards this project as particularly valuable for two reasons: first, its complexity offers Steiner AG the opportunity to underline its credentials as a hospital-building specialist. Second, we are glad to be contributing to the expansion of the intercantonal acute care services in the Vaud/Valais border region." Steiner already started on various preparatory works for the project in February 2016. Pipelaying is in progress and reinforced-concrete works are scheduled for completion by spring 2017. The subsequent insulation, facade erection, building services and interior fit-out works will be geared to maximizing flexibility for the furnishing and future use of the hospital departments. The construction phase is due to last for around three years, with the new Riviera-Chablais hospital scheduled for completion in December 2018. The official inauguration of the hospital will follow in March 2019.

The Riviera-Chablais hospital - often abbreviated to "HRC" (Hôpital Riviera-Chablais) - will also have a restaurant with kitchen to serve staff and patients. The external works include a 670-space car park for staff and visitors. The site of the future building borders Route du Vieux Sequoia, on which stands a giant, 27-metre-high sequoia that gives the road its name and which will mark the entrance to the hospital. The HRC site in the municipality of Rennaz (Canton of Vaud) also enjoys excellent transport links: it can be readily accessed by car from the Villeneuve motorway junction and by train via Villeneuve station, which is only 2.5 km away, and from where visitors will be able to take the extended trolley bus route to the hospital entrance.


Steiner AG
Steiner AG is one of the leading project developers and general / total contractors (GC/TC)in Switzerland, offering comprehensive services in the fields of new construction, refurbishment and real estate development. The company, which was established in 1915, has constructed more than 1200 residential construction projects, 540 commercial properties, 45 hotels and 150 infrastructure facilities such as universities, schools, hospitals, prisons and retirement homes. Steiner AG has its headquarters in Zurich and is represented by branches in Basel, Berne, Geneva, Tolochenaz, Lucerne and St. Gallen.

Riviera-Chablais Vaud-Valais
Hôpital Riviera-Chablais, Vaud-Valais (HRC) took over the activities of the Riviera and Chablais hospitals with effect from 1 January 2014. The new intercantonal hospital now operates the Riviera (Vevey Providence, Vevey Samaritain, Montreux and Mottex) and Chablais (Aigle and Monthey) sites. From 2019 the new hospital in Rennaz will accomodate acute care services in a single 300-bed building. Two 75-bed outposts in Vevey and Monthey will provide community care, geriatric and rehabilitation services. 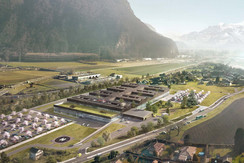 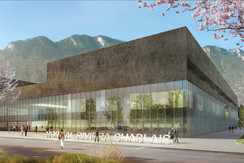