After a near-five-year construction period, Swiss Post today held a VIP event to celebrate the official inauguration of the new PostParc office and service centre at Berne railway station. Worth over CHF 200 million, the PostParc facility was a major project for Steiner AG, which acted in the role of total contractor.

The new complex extends for some 180 metres along Schanzenstrasse and Postbrücke bridge. The two new buildings and the fully refurbished high-rise provide some 30,000 m2 of office accommodation and 10,000 m2 of light-industrial space. PostParc's first tenants already occupied their new premises in November 2015.

A feat of logistics
In his speech at the VIP event, Steiner AG CEO Daniel Ducrey outlined the key challenges encountered during the near-five-year construction period and looked optimistically to the future: "The PostParc centre is now ready to accommodate the tasks and satisfy the purpose for which it was designed and will deliver lasting success for the client. We wish to express our thanks to Swiss Post and PostFinance for letting us handle this exceptional contract." The works for the large-scale project were performed directly above Berne's main rail hub. As a result of the exposed location, allowance had to be made for countless interfaces with adjoining structures. It took over a year just to clear the site, which was itself a major logistical undertaking: up to 80,000 people had to pass the site every day as the demolition works proceeded. At the same time, trains were constantly arriving at or departing from twelve rail tracks below the site. The finished complex comprises three buildings: the Swiss Post high-rise to the east was fully refurbished. The operations building fronting Schanzenstrasse and the old mail station were demolished and replaced by two longer and slimmer buildings. The glass facades combine elegance and transparency while affording clear views through the buildings.

PostParc – a project of impressive proportions: 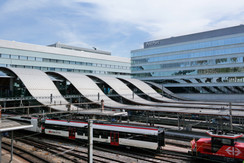